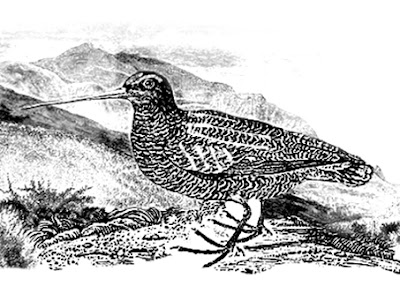 To the delight of many North Country birders, a centuries-old mystery may be on the verge of being solved. The ivory-billed snipe, or “IBS”, was first reported by Manasseh Cutler in 1785 on Mount Washington. Harvard professor Jacob Bigelow also claimed to have seen IBS near Lakes of the Clouds, and included it in his book, Flofula Bostenensis, 1840. 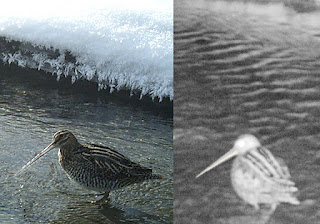 This sandpiper-like bird, Gallinago iocus, was not seen again for a century and a half, and was presumed extinct. Until now. Remote cameras installed for amphibian research at Lakes of the Clouds captured two images last week of what appears to be G. iocus feeding in a small margin of open water. Identification marks include the long, whitish bill and stripes on wings and back which differentiate this species from both Wilson and Wesley snipes. 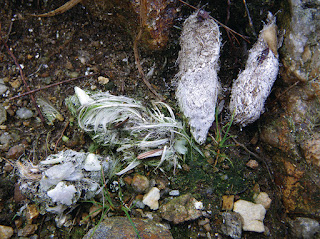 This week, after significant snow melt, AMC volunteers collected fox scat samples from above treeline on the Presidential Range which appear to contain feathers and remains of G. iocus. These have been sent to Tufts Labs for DNA analysis. The press expects to get wind of the results on April 12th. 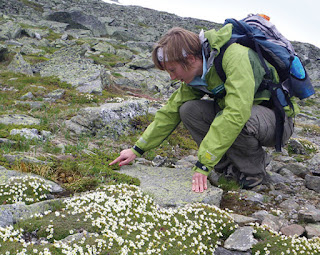 Another clue to the rare bird’s presence is what were suspected to be abandoned IBS eggs in the Alpine Garden, discovered by AMC staff in 2015. Before the USFS avian forensic team could arrive at the site, 110-mph gusts blew the specimens into Huntington Ravine. 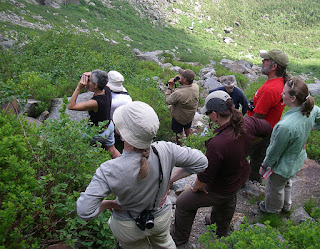 Birders will be on high alert for IBS this summer. Efforts are underway to organize a volunteer survey for Gallinago iocus on the Presidential Range in June. If you’d like to help, especially if you have no experience with snipe hunts, please contact Nicky Pizzo, Pinkham Notch Program Manager. Pizzo will be sure to say, "Happy April Fools' Day."

Photos and text by Allison W. Bell. Bell is the co-author of AMC's Field Guide to New England Alpine Summits and a frequent AMC Nature Notes guest blogger. She also has a great sense of humor.