As the end of October approached, people of all ages donned outfits to change their appearance for the evening. Halloween is one of the few holidays that allow individuals to embrace their creative and unusual sides. For humans, the chance to change appearance is celebrated, for some forest critters this change is crucial for survival. As the fall temperatures drop, the ermine (mustela erminea) and snowshoe hare (Lepus americanus) summer coats are shed for a snowy white fur. Shortened daylight hours and lower temperatures trigger the pineal gland and a hormonal response in these animals. This results in the production of altered biochromes. These biochromes are found either at the surface of the skin or in deeper level cells, where they are considered chromatopores (pigment-containing and light reflecting cells). Mammals have only one kind of chromatopore, the melanocyte. You may recognize these cells as melanin. As hair is dead tissue, the brown 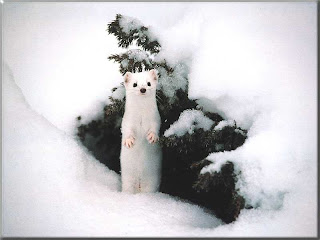 summer fur must be shed to grow the white winter coat. Although the colored coat provides camouflage in the summer and early fall months, its color is stark against a wintery landscape.

The ermine coat is almost entirely white in the winter season with the exception of a black tipped tail. In the middle ages, the ermine’s white coat was popular in clothing, and was commonly seen lining the King’s robes. Today, the ermine coat is rarely used and its population is neither threatene 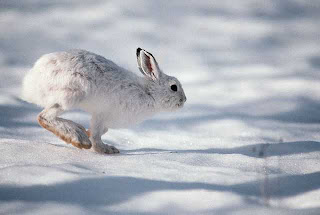 The snowshoe hare’s light brown coat is also shed for long white guard hairs, starting with the ears and feet. This transformation takes roughly 10 weeks to become entirely white. They depend on their cryptic coloration to hide from predators that include lynx, coyotes, foxes, wolves, pine martens and birds of prey. In summer, they shed white for mostly rusty brown coats to blend with trees and soil. Recent climate changes result in fewer days with snow on the ground. This means that white hares are hiding in a brown forest. A hare that is the wrong color stands out like a King in his new clothes.

As the seasons are changing, keep an eye out for the white ermine and snowshoe hare. They are easiest to spot on bare ground, but will soon blend in with the white landscape.