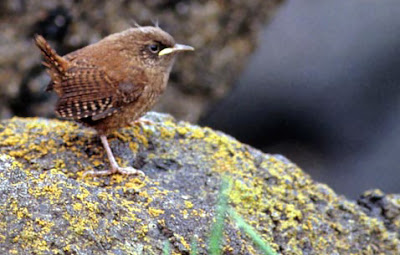 One of my favorite evening activities involves a short hike to square ledge to stretch out the stiff muscles. From this vantage point I can see all of Mount Washington and watch the bustle of the Visitor’s Center below. Leaning back, I close my eyes and listen to the sounds of nature. The White Mountains play host to a multitude of boisterous species, from the spring peepers to howling coyotes. However, one of my favorite sounds is the song of a winter wren. Winter wrens produce 16 notes per second, that number increasing to 36 notes per second out west! If you have ever encountered a rooster’s cockadoodledoo, you are still unprepared for the power behind this wren’s song. Per unit weight, a winter wren produces 10 times more power than a rooster. Not only can this bird sing loudly and quickly, but its song is also quite long; usually lasting up to 10 seconds with a series of trills and harmonies.

Shockingly, this brown bird is quite small, weighing in at 0.3-0.4 ounces and 8-12cm in length. It has a thin, pointed bill and a short tail that is usually cocked upward. The winter wren is thought to have originated in the new world and colonized the old world via the Bering Strait. Today, the wren is found across the Americas, Europe, Asia, and Africa. It has 35 subspecies which occur in higher densities within conifer forests. This bird feeds on invertebrates including insects, spiders, and millipedes.

The scientific name Troglodytes troglodytes was adopted from Troglodyte, meaning a person who dwells in caves. Although the winter wren’s scientific name suggests that it nests in caves, this bird actually nests in structures consisting of moss, bark, twigs, grass, and feathers. Some birds may use preexisting cavities, or build nests at the base of trees and in branches.
Next time you are hiking in the White Mountains take a moment to sit and listen to the sounds around you. If you are lucky you will hear the winter wren song and appreciate for yourself the beauty and power behind this tiny brown bird.