Life is bustling in Pinkham Notch as the warm summer days encourage even the most timid hikers out for extended treks. Moose are spotted on a daily basis in their roadside wallows, beavers are active in the pond across the road, and a red fox has adopted the Pinkham Notch Visitor Center’s roof as its new lookout. Despite these frequent wildlife sightings, one of the more interesting encounters this summer was the presence of a black racer snake in our wildflower garden. A threatened species, this snake is more commonly found in southern New Hampshire. The black racer was aptly named due to its satiny black skin and fast pace. They can grow to be 20-40cm long and have white markings under their chin. This snake is a diurnal (day) hunter, consuming small mammals, amphibians, insects, other snakes, and may even feed upon their young. Although not poisonous, this snake is known to rattle its tail (bluff) and may even strike when threatened or captured. Their habitat includes overgrown fields, pastures, rocky ledges, gardens, edges of wetlands, and woodlands. In the image below, a black racer is consuming an American Toad headfirst. A snake’s flexible jaw is connected to its skull by ligaments, allowing it to swallow its prey whole. It is hard not to feel bad for the toad. 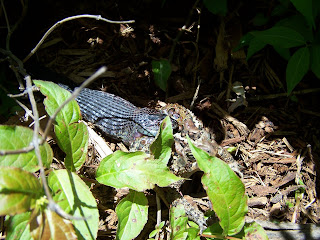