Singing isn't just for the birds! 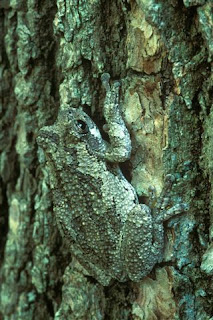 I heard the first gray tree frog of the spring singing yesterday afternoon. Not everyone that hears this hearty, resonating trill will think it's as melodious as a warbler but it's definitely my favorite frog call.

The gray tree frog is one of two tree frogs found in our area, the other being the spring peeper. The gray tree frog is quite a bit larger than the peeper and very camouflaged. Adults are 2.5 inches long and rectangular, with surprisingly dry and warty-looking skin. They are mostly gray and have a white spot just below each eye. There is a brilliant, yellow-orange splash of color on the underside of their hind legs. As it's scientific name implies, Hyla versicolor they have the ability to camouflage themselves from gray to green, depending on the substrate they are sitting on. Like all treefrogs, they have large, rounded toe disks that enable them to climb

This frog spends most of it's time in the trees, coming down at night and to breed in the spring. Breeding season runs from April to August. Males will gather in trees and bushes next to breeding ponds and swamps and begin calling. The male will aggressively defend its territory from intruders. The female selects a mate based on its call. She lays her eggs on the surface of shallow water in ponds or swamps. She may also lay her eggs in standing water in tire ruts, vernal pools or roadside ditches. The eggs are attached to vegetation to keep them from floating away. The female lays as many as 2000 eggs in groups of 10-40. The tadpoles hatch in four or five days and will change into froglets in about two months.


A resting tree frog clenches its two front feet into fists and curls them beneath its chin, so the whole body is compact. The belief is that in this posture, the frog casts little or no shadow and its outline is completely obscured from foraging birds, snakes, or tree-climbing mammals.

This immature gray tree frog was found in the native plant garden at the AMC Pinkham Notch Visitor Center. I was taking a picture of the closed gentian, what a great surprise to find the tree frog resting on the leaves. 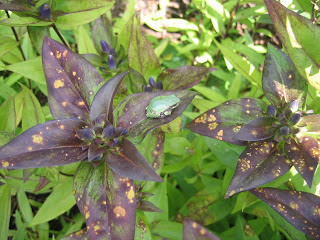