Up to Bat for Bats

Why they need you rooting for them

For us, shortening daylight hours may make it harder to stay awake in the evening, but for bats, it foreshadows another kind of sleep: hibernation. And in the face of a long, cold winter ahead and the increasing threat of a deadly new disease, bats need you rooting for them more than ever. 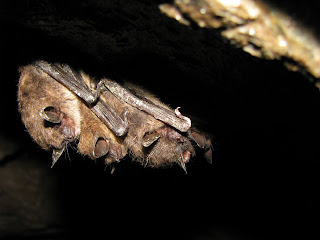 While the Hoary bat, Silver-haired bat and Eastern red bat are summer visitors who migrate south to overwinter in warmer states, the other five species are year-round residents.

Despite their small size, bats are remarkable. They belong to the order Chiroptera, the second

largest group of mammals after rodents, and can be found on every continent except . To 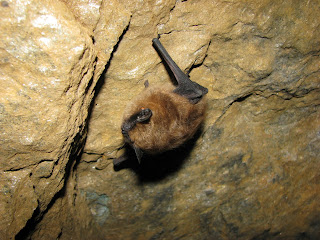 the envy of many people, bats are the only mammals to obtain true flight. The tiniest bat ever recorded weighed 2.4 grams (making it the smallest mammal in the world), while some of its relatives amass over 1,000 grams- more than 400% larger! bats who make it through their first winter will often survive for 10 years or more, depending on the species, though individuals of over 30 years of age have been identified. Compare that to a mouse of similar size, who may survive for a year or two at most.

The change in seasonal activity that ’s bats experience may surprise you. In the spring, they leave their hibernacula and gorge themselves on insects while migrating up to 200 miles to summer roost sites. The bats roost in both dead and living trees in mature forests, waking at night to hunt. They use echolocation to trap their prey, and many individuals will eat half their body weight in insects each night, with pregnant females eating up to 100% of their weight. The amazing ability of individuals of different species to return to the same roost sites year after year makes it especially important that we avoid logging or habitat alteration in these locations. The summer is also an important time for birthing: pregnant females are usually colonial, while males and females who are not pregnant will roost singly. Bats have a low reproductive rate, with females giving birth to between one and three pups per year. Long life spans and low reproductive rates indicate that bats will not rebound quickly if something threatens their numbers.

In late August and September, bats gather in large groups at hibernacula across the country to breed and to commence their long winter nap. While some bats may make use of human habitations, most hibernacula are located in mines and caves characterized by high humidity, constant temperatures and low levels of disturbance. During hibernation, bats generally huddle together to conserve heat. Their body temperature plummets from an average of 100°F to an icy 32°F. Bats heart rates also slow from a galloping 210 beats per minute to around 8 beats per minute. Any attempt to reduce human temperature and heart rate by even a quarter of those ratios observed in bats would quickly kill us.

Our furry friends are already snug in their winter hibernacula by the beginning of October. So why should you be concerned? 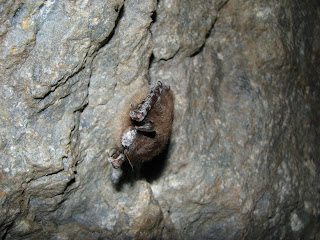 In 2006 in , scientists identified a deadly new disease among hibernating cave and mine bats that they nicknamed “White Nose Syndrome” (WNS) for the strange white markings it produces around the noses of some infected individuals. As of 2010, WNS has spread to nine northeast and mid-Atlantic states, with cases suspected as far west as . And the numbers are shocking. Over a million bats have already died of WNS, and the death toll is expected to continue to rise. In some hibernacula, the death rate has sometimes been as high as 90-100% of all individuals.

Researchers are still piecing together a preliminary understanding of what White Nose Syndrome is and how it may work. The fungal infection observed on sick individual has been identified as Geomyces destructans, a new species of the Geomyces genus, a commonly found group of fungus that has soil associations and grows best around 40°F: typical hibernacula temperatures. While biologists are unsure as to whether the fungus itself is the culprit or there may be a third party in the large numbers of deaths, it is believed that Geomyces destructans invades skin to create ulcers and alters typical hibernation patterns. Some scientists hypothesize that the fungus is extremely itchy, arousing bats and causing them to burn critical energy reserves.

Not all infected bats have the classic white markings of White Nose Syndrome; and because most bats groom themselves when awake, it is rarely visible on active individuals. Signs of WNS include visible fungal infection, abnormal arousal, moving to hibernacula areas with cooler temperatures, and flying or visibility outside of caves during the winter months when insects are absent and bats should be hibernating. All dead bats show very low percentages or no body fat: essentially they have woken up too early and have starved to death. Scientists believe that transmission of the fungus occurs bat-to-bat and surface-to-bat. Thus, the fungus infects new caves if it is transported in on clothing, gear, or infected bats.

Why You Should Care

That’s a question that biologists are now seriously asking themselves. 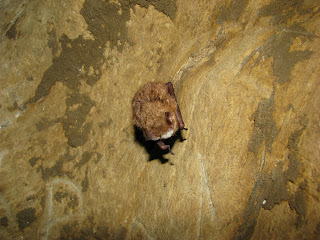 about the possibility of losing whole bat species. The little brown bat, previously the most numerous bat in the Northeast, has been hardest hit. The bat, a federally endangered species, has also been identified as having contracted the disease. The tri-colored, northern long-eared, big brown, and small-footed bats have been affected. As WNS spreads, it is predicted that the cave myotis and endangered big-eared and gray bats will also experience mortalities. Over 100 partners are working on the White Nose Syndrome mystery, and biologists are holding their breath.

The bats are voracious insectivores. We have reason to say thank you to them, for without our bats it is likely that an abundance of pests would chew through our forests, fields, and make themselves increasingly comfortable in our homes and gardens. And bats across the world are important seed dispersers, pollinators, prey, as well as major predators of insects. Scientists don’t have a complete understanding of the ecological role that bats play, or the chain of consequences they would set off if they were to disappear.

How You Can Help

In order to better gauge populations, researchers are continuing to tag bats across the country. Click here to count bats for conservation.

Help researchers keep track of WNS. Report any abnormal (winter) bat sightings in the state of by clicking here.

If you have bats on your property, please give them a better chance of survival and allow them to stay put. For information for homeowners on how to deal with bats, please click here.

If you are a caver or spelunker, please respect cave closings. When visiting caves, please do not disturb bats, and disinfect or change gear or clothing that you have worn in other caves. Scientists suspect that cavers are responsible for some of the observed transmission of the fungus between caves.

Interested in learning more about the natural history of the ? Join a Naturalist Guide at the AMC's for a guided walk or hike! You can also call (603) 466-2721 for program times and details. Have a natural history question that you would like answered in this blog? Send an e-mail to amcpnvcnat@outdoors.org

Sources for this blog:

Photographs: All photographs courtesy of Fish and Wildlife Service