The Monarchs Are Here! 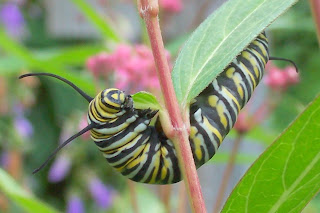 Stepping outdoors to see Monarch caterpillars (Danaus plexippus) chewing their way through the leaves of swamp milkweed (Asclepias incarnata) in the Pinkham Notch Native Flower Garden at the end of July, I knew that late summer had arrived in the White Mountains.

As a child, I caught the fat caterpillars and watched them change into beautiful orange-and-black-winged beings. I must confess that I am still thrilled when I see these small, interesting creatures, and this year, like many others, I decided to capture a Monarch and watch it work the magic of metamorphosis.

The Monarch caterpillar I found arrived in the Pinkham Naturalist Office in late July in a large glass container filled with milkweed cuttings and a few well-place twigs. With a plant camera taking photos every hour during daylight, I have been able to capture its amazing transformation from caterpillar to chrysalis to adult butterfly. Watch the time lapse video here.

The Monarch I captured, like all Monarchs, began life as a tiny white egg the same size as the head of a pin. An adult female Monarch butterfly may deposit 400 to 600 eggs on milkweed leaves, which is the only food that the caterpillars will eat. The egg gradually turns from white to cream yellow to gray with a black dot when the larva is ready to emerge.

Monarchs are born with a tiny green body and black head anywhere from 3-15 days after the egg is deposited. The baby caterpillar, or hatchling, typically takes 1-3 hours to eat their way out of their egg casing, and then devours the casing as a source of food.

Newly hatched caterpillars eat as much milkweed as possible- probably 20-30 leaves on average. Milkweed contains a toxic alkaloid that would kill most insects. However, Monarchs have adapted to ingesting the alkaloid and in fact become toxic to would-be predators. 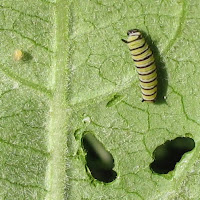 As larva, Monarch caterpillars grow at different rates, depending mainly on temperature. All Monarch caterpillars, however, go through five different “instars” or molts, before they become a chrysalis. Each time, they will shed their exoskeleton (including the exterior of their head) to make room for their rapidly growing body. Their old skin quickly becomes a nutritious meal. Monarch caterpillars have 12 simple eyes to help them see.

At this stage, I watched our Monarch caterpillar roam all over the glass tank, for once unmindful of tasty milkweed. The caterpillar is now about 3000 times heavier than at birth. After trying unsuccessfully to find a comfy spot on the ceiling, our caterpillar was content with a twig.

At this stage, Monarchs carefully weave a small white “button” on the twig that must support their weight as a chrysalis. This is an important job, and a caterpillar won’t begin to change until it is sure that its button is adequate. When the caterpillar is ready, it turns around and uses crochets, special hooks on its back legs, to hold on to the button.

Now the Monarch hangs upside down in a “J”.

Big changes are taking place in the Monarch’s body. The caterpillar’s antennae shrivel up and their body shows a green tint near the head. The old skin then splits, and the newly formed yellow-green chrysalis is visible. The caterpillar must wriggle around in the chrysalis to remove their old skin. Simultaneously they must jab a black rod, called a cremaster, into the button before they shed their old legs. Otherwise, they could fall.

Once inside of the chrysalis, the Monarch is a pupa. Even in a new chrysalis, you can already see the formation of many parts such as the antenna, eyes, and legs of the butterfly-to-be. Six holes, called spiracles, allow the chrysalis to breathe.

A new chrysalis will take 15-20 hours to harden, until which it could be easily damaged even by a blade of grass. When the chrysalis is hard, the spots on the outside will turn golden.About two day before the adult Monarch is ready to emerge, the chrysalis turns from green to green-blue to gray-blue.

A few hours before rebirth, the orange and black of an adult Monarch is visible. Most Monarchs spend 10 to 14 days in their chrysalis before emerging. The Monarch we photographed spent 14 days in its chrysalis.

When the Monarch breaks free of its chrysalis, it has a short, fat body and small, crumpled wings. The proboscis, or tube used to sip a new diet of flower nectar, has also developed in two parts, and the butterfly must “zip” them together before leaving the chrysalis. Adult Monarch butterflies have compound eyes.

Monarchs must pump fluid into their four wings and wait about 2 hours for the fluid to harden before their wings are suitable for flight. During this time, Monarchs must sit still, as any pressure on their wings could permanently deform them.

When our Monarch hatches, I can determine that it is a male. Male Monarchs are identifiable by thinner wing-bands then their female counterparts, and they have two black dots (scent patches) in the middle of their lower wings. 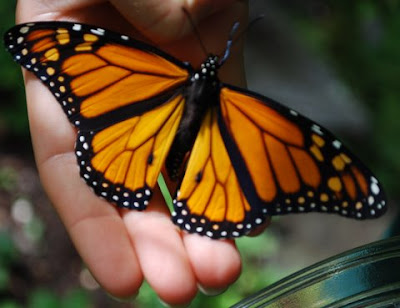 We set our Monarch free as soon as it’s wing were dry. Monarch butterflies are long distance travelers, completing a migration from Mexico to Canada in four generations. Most individual butterflies will live for only 2 to 6 weeks, during which they travel, mate and deposit their eggs. However, the last generation of individuals born in early to mid fall will survive for longer, saving up food that they store in their abdomens and flying hundreds of miles south to overwinter. There they will form dense clusters with other Monarch individuals to escape the worst of the cold and will remain relatively inactive for four to five months before breeding and perpetuating the migration.

I hope you’ll join me in welcoming the offspring of Monarchs in your gardens across the country. There are about 2,400 different types of milkweed that grow around the world, and some of them like the Common Milkweed, (Asclepias syriaca), grow in many places across the United States.

Interested in learning more about the natural history of the White Mountains? Join a Naturalist Guide at the AMC's Pinkham Notch Visitor Center for a guided walk or hike! You can also call (603) 466-2721 for program times and details. Have a natural history question that you would like answered in this blog? Send an e-mail to amcpnvcnat@outdoors.org