I took a stroll with a friend on the Lost Pond trail last week, excited to stretch my legs and make some new natural history discovery or other. We had gone all of 100 feet from the trailhead and were crossing a swamp bridge when my friend said “Whoa!” and stopped in her tracks. 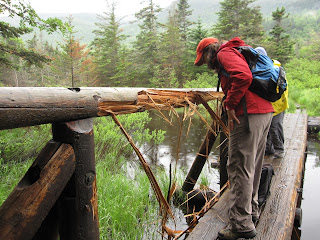 “Something” had torn up half of the bridge! People? Moose? Beaver? Who would have wrecked such havoc, and why?

Much of one end of the bridge had been shredded horizontally. We identified claw marks along the top of the bridge and small puncture marks along a supporting beam. Looking more closely, we eventually found and pulled out a piece of grey-black hair.

What has five claws, sharp teeth, and grey-black hair? The “something” must have been a black bear! 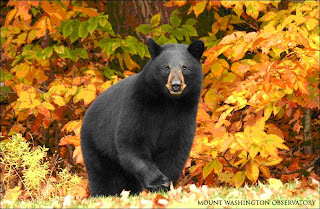 The American black bear (Ursus americanus) is a relatively common but easily misunderstood North American mammal. From Smokey to horror movies to Yogi to teddy bears, we have identified bears with our worst fears and highest hopes.

It’s time to get the bare facts on black bears.

The truth is, most black bears would rather avoid people than socialize with us, and it’s not uncommon for a dog to tree a startled black bear. Black bears are omnivores by nature, eating nuts, acorns, fruits, insects, and greens, and occasionally supplementing this diet with meat where food is scarce. They are good climbers, runners, and swimmers with a keen sense of smell and sharp up-close vision, traits that come in handy for a life in the woods. Adults are solitary, and males and females only meet for a short time during mating season, which occurs from late May to July or August. Cubs are born in January or February and usually stay with their mother for about 19 months. During the winter months, bears curl up in their dens and take a prolonged nap, although they are not considered true hibernators.

How big is a black bear? Typically, an adult will measure from 4 to 7 feet long, with males being larger than females. At birth, cubs weigh only ½ to 1 pounds. However, an adult female usually weighs between 90 and 300 pounds, and an adult male may weigh from 125 to 500 pounds. The biggest wild black bear ever weighed, a male captured in , was 880 pounds!

You may be surprised to learn that black bears don’t growl. If they do choose to make noise, they will often grunt. They may also clack their teeth and make loud blowing noises if afraid. Black bears have been described as having a resonant, human-like voice.

Perhaps the most common misconception about black bears is that they will attack people in defense of their cubs. While I would never advise getting between a bear (or any animal!) and their young, there have been no recorded black bear attacks on people in defense of cubs. The best thing you can do if you see a black bear is to make your presence known to the animal by yelling “Hey bear!”, clapping your hands together, and looking as imposing as possible. Don’t ever try to outrun or outclimb a black bear- I guarantee they’ll win.

So why would a black bear rip up our bridge? Black bears are highly aware of other black bears, and they commonly mark posts or trees in their territory by biting, scratching, and rubbing up against wood to leave their scent (and sometimes their fur). They may also leave nearby scat.

Most black bears are diurnal (active during the day), and thus we may encounter them from time to time. The individual that damaged our bridge was later sighted and appeared to be a juvenile making a statement: here I am!

Interested in learning more about the natural history of the ? Join a Naturalist Guide at the AMC's for a guided walk or hike! You can also call (603) 466-2721 for program times and details. Have a natural history question that you would like answered in this blog? Send an e-mail to amcpnvcnat@outdoors.org

Sources for this blog:

2. “Ursus americanus” from the Mount Washington Observatory at http://www.mountwashington.org/