MOOSE: There have been numerous moose sightings at and around the over the past few weeks. A mother moose and her yearling have 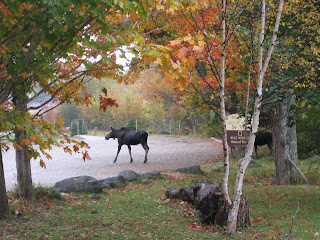 been seen not only in our parking lot but across Rt. 16 in a beaver pond. The other night the pair was spotted outside in the courtyard between the lodge and the Trading Post. There was also a sighting over the Columbus Day weekend on the Old Jackson Road Trail, a section of the .

In the world of moose (Alces alces), fall is the time when “love” is in the air. The mating season fo 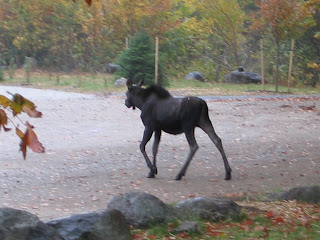 r moose, which is late August through October, is termed the “rut”. Male, or bull moose, scrape trenches into the ground with their front hooves as part of their mating ritual. When searching for females to court, bull moose will emit a low, grunting noise that carries for a distance through the forest. Males often compete for females; they will use their antlers and brute strength to dissuade competition for the same female.

There are some simple moose watching tips to keep in mind during this fall season:

OBSERVE FROM A DISTANCE: If you are lucky enough to spot a moose, don’t follow or approach it. Bring binoculars and a telephoto lens to get a good look.

RESPECT THEIR WISHES: If a moose is in the middle of the trail, don’t try to scare it away from the trail. Bushwhack around it or change course. If it is coming toward you, step aside and let it pass.

AVOID SENSITIVE SEASON: During breeding season (fall) and when cows are caring for young (spring), moose can be aggressive. Be especially careful to keep your distance.

DRIVE SLOWLY IN MOOSE COUNTRY: If you are driving near a river or wetland or you see moose crossing signs, slow down. Be especially cautious at dawn and dusk. Drive with high beams on and watch for eye shine.

BEAVER: Speaking of the beaver pond across the street, there is documented recent beaver activity there. Beavers (Castor canadensis) dammed up the watershed area that runs p 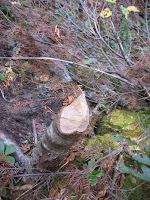 arallel to Rt. 16 years ago; there were actually two dams built in order to stem the flow of water heading to the north (towards the Peabody ont 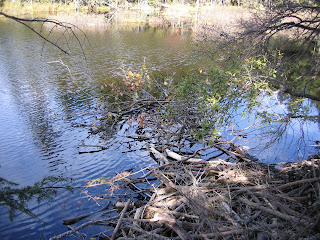 o Androscoggin rivers) and to the south (towards the Ellis onto the Wildcat onto Saco rives). In order to survive the cold winters, beavers will dam running water with the intention of creating a habitat where the water depth is at least 2 feet (the beavers across the street have made improvements upon pre-existing dams). When the water freezes, the beavers are able to go from their lodge structure directly into the pond under the protection of the ice, evading predators. Fall is the time of year that beavers are busy gathering and storing food that will be accessible to them throughout the colder months.

Interested in learning more about animals in the fall? Join a Naturalist Guide at the AMC’s for a guided walk or hike. Call ahead (603-466-2721) for program times and details. Have a natural history question that you would like answered in this blog? Send out an e-mail to amcpnvcnat@outdoors.org.