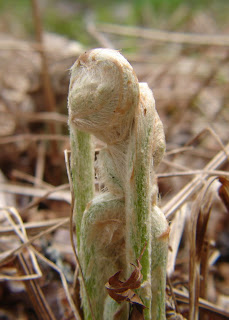 It’s fiddlehead season! To most New Englanders this gets the mouth salivating. To those from away it brings a wrinkle to their brow. They wonder if we who gather and eat fiddleheads are really sane or are we suffering from cabin fever. To those who do in fact taste fiddleheads for the first time it is often referred to as an acquired taste. But too many in the north east fiddleheading is a family tradition and the consumption of fiddleheads is a spring tonic, a true sign that winter has gone and gardening season has begun.
Fiddleheads are the sprouts of ferns. All ferns have fiddleheads but not all fiddleheads are consumable. If this is the first time you are planning to collect fiddleheads please be make sure you know what you are looking for.
The fiddlehead species that is searched for and collected is that of the ostrich fern (Matteuccia struthiopteris). These ferns are large and feathery when they achieve their adult stage. They are called ostrich ferns because the fern resembles the fan of an ostrich tail. These ferns grow in colonies along riverbanks and in moist sandbars. When picking fiddleheads look for tight coils and pick only an inch or two of the stem above the ground. There will be a brown papery cover over the head itself. This needs to be removed prior to cooking. Never take all the fiddle heads off of clump. Allowing some to stay behind gives the fern a chance to grow and insures that there will be more fiddleheads for next year. Prior to cooking be sure to clean the papery cover off and wash them in cool water. Drain the water off and the cook or store in the refrigerator. They will keep for about 10 days. Cook them like you would broccoli or asparagus, steam them or fry them is a little butter with garlic is the usual way to cook them. Some people use them in their stir-fries.
There you have it. Now pull on those mud boots and take the kids out for a little afternoon Fiddlehead Hunting. Bon Appétit