Geology of the White Mountains Part 2: The Mountain Building Events 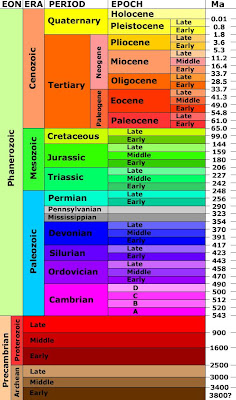 As I wrote earlier the Appalachians have a very complex geologic history that built major mountain chains which formed and then eroded over vast periods of time. I will begin the history around 500 million years ago during the Late Cambrian/ Early Ordovician periods. Since the rock record covers such vast quantities of time geologists have developed the geologic time scale to group rocks of similar age. The Geologic Time Scale has been grouped into eons, eras, periods and epochs. I will be speaking in terms of the periods while describing when the events occurred.

As land masses collide they end up forming large mountains as they suture together. There are three main mountain building events that played into building the White Mountains and the Appalachian Mountains. I will be referring to these mountain building events as orogenies. The mechanics of these collisions as well as more information on the various rock types can be found in an earlier blog entry.

The landmasses that would eventually become North America were located further south on the equator. The White Mountain Region was covered by a shallow inland sea during the Late Precambrian into the Cambrian. This sea was widening through sea floor spreading. Ancient mountains were slowly eroding and depositing sediment these sediments into large deltas and what was then the Iapitus Sea. These sediments were compressed to form sandstone and shale which would later form the Littleton Formation (A rock unit composed of schist and quartzite found on top of Mount Washington). These sediments covered almost all of New England and New York. 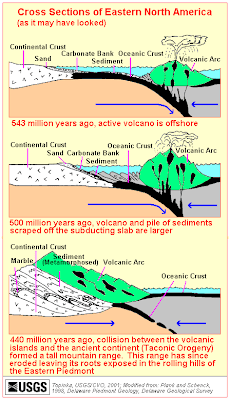 During the early Ordovician, convection currents reversed and the Iapitus Sea (or Proto-Atlantic Ocean) began to close. The compressional forces did not break the plate directly at the contact point between the thick continental and thinner oceanic crust. The plate broke offshore and the western segment was pushed underneath the eastern segment. As the slab was subducted portions melted, rose through the crust and formed a chain of volcanic islands. An example of this today would be the Philippines and Japan. A portion of the Iapitus Sea slowly closed; ocean sediment was scraped off the subducting slab and accumulated against the island arc. During the Early Devonian (about 400 MA) the arc collided with Laurentia (Proto-North America). Due to the compressional forces acting on the land masses a series of slabs of continental shelf strata were thrust on top of each other (in the form of thrust faults). This collision formed the Taconic Mountains. This marked the first pulse of the formation of the Appalachian Mountains. Water flooded much of Laurentia with a shallow inland sea. Off the coast the island of Avalonia was slowly making its way towards Laurentia.

During the Middle Devonian (380 MA) the Avalonia Terrane docked onto what would eventually become North America. This terrane was composed of parts of New England, Belgium, Wales, England, Southern Ireland, Nova Scotia, and part of Newfoundland. The section that remained connected to North America has been called Avalon. This collision resulted in severe deformation of the bedrock and the formation of large mountains that are believed to have rivaled the Alps and possibly the Himalayans. This event is what formed the White Mountains. The pressure from this collision transformed the ocean sediments (shale, quartz sandstone, and volcanic sediments) into schist, quartzite, and gneiss and made them more plastic and easily bent into folds. These transformed sediments, now exposed on top of Mount Washington, were originally 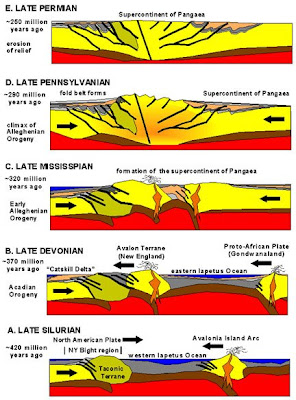 located deep underground. The center of this plate collision is now visible due to millions of years of erosion.

During the Middle Devonian volcanic activity resumed with large upwellings of magma beneath the earths surface. This resulted in the Quartz Monzonite found around Saco Lake and on top of Mount Willard in Crawford Notch. A long period of erosion followed the Acadian Orogeny where the mountains were believed to be eroding at a rate of two feet every 10,000 years.

Gondwanaland (which included Africa, South America, Antarctica, and Australia) collided with Laurentia between the Mississippian and the Permian during the Alleghenian Orogeny. This created large mountains through the southern Appalachians and marked the completion of the formation of the super continent Pangea.
The Break Up of Pangea

During the Late Jurassic and Early Cretaceous Pangea was breaking apart, large volcanoes formed in the White Mountains. These volcanoes are believed to have erupted with caldera style magmatism and would have erupted thousands of times more material than Mount Saint Helens. Calderas violently erupt the material within their magma chamber, which then collapses. Any residual magma is then squeezed out the fractures in the surrounding rock formed by the collapse, forming a ring of intruded rock called a ring dike. Remnants of these eruptions can be found on top of Kearsarge North (Off of Hurricane Mountain Rd, Intervale, New Hampshire), Mount Hale (Off the Zealand Rd, Twin Mountain, New Hampshire), South Moat Mountain (outside Conway, New Hampshire) and in Ossipee New Hampshire.

The break up of Pangea was followed by a period of erosion to a point where Mount Washington probably rose only a thousand feet above the surrounding land (this is called a peneplain). A series of uplifts lifted the Whites. The remnants of this ancient peneplain are the lawns found around Mount Washington and Northern Presidential Range.

This area entered into a series of ice ages and glacial advances, but I fear that story will have to wait for another day. Check back for more information on the natural and cultural history of the Appalachians.
Graphics from USGS