When visitors come to the AMC’s in the , there are a handful of questions that are often asked, again and again. There are the usual questions about trails and conditions, the location of bathrooms and potable water. A favorite question for a Naturalist Guide is any dealing with the natural history of the area. A popular question this time of year is “Where do moose go in the winter?” 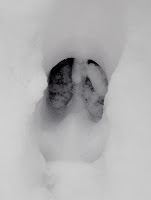 is renowned for its plentiful moose population. Driving on Rt. 16 through Pinkham Notch provides, at least for 3 seasons of the year, abundant opportunities to observe moose, who often seem to wander around in the road (driving about 10 miles slower than the speed limit with high beams on has assisted many North Country drivers in escaping direct contact with moose during the twilight hours). In the spring moose are attracted to the salt left behind from the winter on the roadside, drawing them dangerously close to cars. This past fall, on more than one occasion, guests and visitors were greeted in the morning by a female moose trotting through the courtyard of the . However, many visitors notice that as soon as the temperature plummets and snow starts to fly, there are fewer moose around. Why is there such a drop in moose sightings during the winter months? .

Moose (Alces alces) do not hibernate or migrate for the winter season. Moose were designed to withstand the harsh climate of the northern boreal forest. These cervids, or members of the deer family, have an amazing ability to insulate themselves against the cold temperatures (their fur is phenomenal). Even th 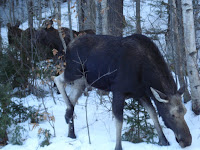 ough their long, sleek legs help them move around in deep snow, they still can use up a lot of energy walking through the woods, which leads to a change in their behavior during the 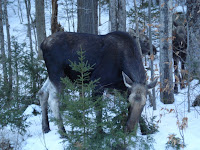 winter months that impacts how often humans see them.

In order to save energy, moose will restrict their movements- instead of covering a large area over the course of their day, they tend to reduce their travels greatly, focusing instead on foraging heavily in a central location. Moose are ruminants; they expend quite a great deal of energy trying to digest their food. It is important that during the winter they consume large quantities of food in a short time, which helps them to use less energy collecting their nutrients. The habitats that contain the concentrated nutrient base that moose require in the winter are typically streamside and in more densely wooded areas containing shrubs and deciduous trees for them to browse upon (places typically further away from human habitation and roads). This behavior leads to a drop in the number of moose sightings in the Pinkham Notch area. 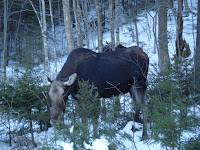 Interested in seeing some moose sign? Join a Naturalist Guide at the AMC’s for a guided snowshoe walk or hike. Call ahead (603-466-2721) for program times and details. Have a natural history question that you would like answered in this blog? Send out an e-mail to amcpnvcnat@outdoors.org.