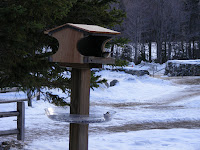 December 1st marks the day at the when the bird feeders are filled with seed for the beginning of the winter season. It is common practice in the northern forest to wait until after Thanksgiving to provide food for wild birds due to the consideration that must be given to the native black bear (Ursus americanus) which become less active in later November and ideally less likely to binge upon bird seed. In many areas it’s a good idea that bird feeders remain empty April through November in the hopes of dissuading bears from acclimatizing themselves to a human-dependent food source (bears are omnivorous, eating massive amounts of vegetable matter as well as insects, rodents, etc.). The bird seed is considered relatively safe from bear consumption once bears den for the winter months.

Although the threat from bears is minimal this time of year, there are still other animals, besides birds, that take advantage of such an accessible source of food. 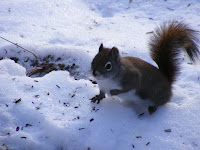 Upon close inspection, the snow at the base of the Pinkham Notch bird feeder(s) is pocked with the tracks of red squirrels. Red squirrels (Tamiasciurus hudsonicus), as many private winter bird feeders may know, tend to await anxiously the arrival of bird seed. Some observers have noted the systematic behavior of squirrels in regards to developing methods to obtain bird seed (the bird feeder manufacturers of the world have made millions on proclaimed “squirrel proof” feeders). Two red squirrels were recently observed “wrestling” near a bird feeder at Pinkham Notch, presumably over a morsel of seed.

Other animals are attracted to bird feeders, but not for the seeds placed there by obliging humans. Numerous predators, including ermine (Mustela erminea) and martens (Martes Americana) are presented with a virtual buffet due to the varieties of birds feasted at feeders. Both members of the weasel family, ermine and martens are adept hunters, and both species have been known to frequent the area around the in Pinkham Notch. In residential areas, domesticated cats (Felis catus) are proficient predators, and have been known to greatly diminish the songbird population year round.

Much has been said about the various non-bird species that can be found at and around the feeders, but what about the birds? Already this season blue jays (Cyanocitta cristata), black-capped chickadees (Poecile atricapilla) and white-breasted nuthatches (Sita carolinensis) have been observed enjoying the bounty.

The pronounced crest of the blue jay, as well as its size (they are members of the Family Corvidae, which also includes crows and ravens) set them apart from the smaller songbirds. Omnivorous, blue jays are known to cache food throughout their range, feeding predominately on insects and masts (seeds). While watching the blue jays at feeders, you can observe breeding pairs make quick work of grabbing some seed and then flying off to store their take for later. 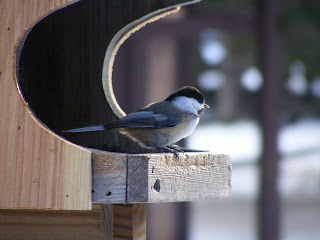 Black-capped chickadees are much smaller than blue jays, with strong, short bills (indicative of the Family Paridae) which help them to split open seeds and nuts. They can often be seen taking seeds and then flying back to cover, where they crack them open and eat them. Sunflower seeds are a particular favorite of this species. 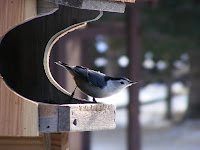 White-breasted nuthatches, frequent visitors of feeders, have a long, narrow beak. This particular bird is also well known for foraging while climbing head first down tree trunks, a method unique to this species.

More birds are often spotted throughout the winter season at Pinkham Notch, including:

Curious about the birds feasting at your feeder? Check out the Trading Post store at the for bird books and feel free to join an AMC Naturalist Guide this winter for a guided snowshoe walk or hike to learn more about animals in their winter habitat. Stay tuned for more blogs about the birds in the White Mountains. Happy Birding!